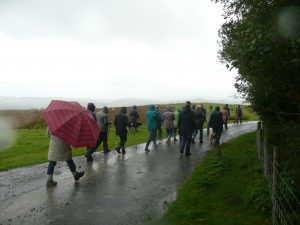 Twenty three hardy souls set out on a cold and wet morning to walk in the footsteps of George Fox, probably. Our morning had started in the Schoolroom with a talk by the walk leader, Derek Turner, who owns and runs the Thomas Shop in Penybont. He gave us a brief history of Quakers in the vicinity and told us of the various tales of George Fox and his visits to the area. One of these visits brought him to this area to spread the Truth and to talk of the Inner Light and his message was well received; far better than it was in Brecon where he was shouted down. Although there is no evidence that he actually spoke on Penybont Common it is known that he preached in the area and that the common was the most likely place.

Clutching umbrellas and walking poles we set out, up the road from the Pales and then out on to the common. Derek spoke of the poor soil that makes for poor grazing for the sheep but also pointed out that the locals still exercise their rights although the management of the common was a somewhat haphazard affair.

We walked up and down hills, crossing small streams and marshy patches, and on the crest of a small hill we stopped to visualise George, surrounded by enquirers, and wondered if it had rained as much on him as it did on us. 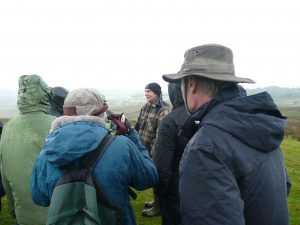 Our walk took us past the remains of platform houses, now just unidentifiable lumps and bumps in the grass, but that were homes to the local population at some point in earlier centuries. 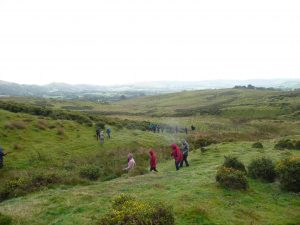 Our final climb took us to a high point on the common from where we could look across to the village of Penybont and see the full extent of the common. Derek explained some of the history of the village which included the fact that Penybont had been the main centre for the area, pre-dating the growth of Llandrindod Wells.

It was then time to return to the Meeting House, wiser and wetter, to eat lunch before the next event.