From the Pales Steering Group

Plans for the future.

The architects, Simmonds Mills, have completed their building survey and are beginning work drafting plans, as well discussing with Powys Planning and CADW what might be possible on the site.  We hope to have more details available at our September celebration week.

July 15-16. Refugee Weekend. On Saturday 15th  refugee families from Hereford will be visiting The Pales for a bring and share barbecue,  and there will be a concert by the Pales peace choir. For more details about refugee actions see the Pales website – www.thepales.org.uk

September 11-17 is our 300th celebration week, with different activities every day to appreciate the  Pales: its  landscape and geology, its inspiring views, the relation of the grounds to the Quaker testimonies, its Quaker history explored by a panel of historians  –  and  a concert  followed by a barbecue. All will be welcome.  More details on our website – www.thepales.org.uk

The peace and quiet of the Pales are some of its most valued  features, but it is also a place where people can come together and share their enjoyment. Here are two reports of recent events.

The June AM is not a Business Meeting but an opportunity for all Ffriends in the Area Meeting to gather and spend time in community, getting to know each other a little better.

Elders and Overseers take responsibility for the day and Peter Hussey, an Elder at Llandrindod Local Meeting agreed to co-ordinate it. He pointed out that The Pales was surrounded by animals; sheep and cattle in the fields and large chicken sheds in the middle of the view. Peter felt that it would be appropriate to spend the day considering and celebrating animals generally.

In the morning twenty eight Ffriends gathered in the Meeting Room to hear a talk on Animal Welfare given by Daryl Booth of SARX, a group whose Mission Statement says that they are ‘ striving towards a world where Christians lead the way in enabling animals to live with dignity, in freedom and in peace’. Daryl began his talk by reminding us of some examples of those who have spoken up and foughtfor the dignity of animals in the past. He included biblical references, stories of a number of Saints, the actions and philosophy of Jesus and the work of several 19th Century reformers. As he was speaking to a Quaker audience he made special mention of Friends’ thinking about animals and their views on animal welfare. He explained that ‘sarx’ is the Greek word for ‘flesh’ and quoted the words from Genesis  “and the Word was made flesh”. He told us that his organisation considers all those with flesh worthy of our respect. He gave us figures on the consumption of various animal species and spoke of the degrading way that ‘food’ animals are treated. He then gave us the opportunity to share our own thoughts and experiences. The discussion broadened to include the significance of animals within global ecology, and their importance to the great variety of communities that exist in different parts of the world. Many Ffriends spoke of their disquiet and concerns about animal rights and the various ways in which they were dealing with this troubling matter. Further information on SARX can be found on their website – http://sarx.org.uk

We then enjoyed a bring and share lunch and some even managed to eat outside on the benches, despite a light falling of rain.

After lunch we all gathered in the School Room where activities involving wool had been arranged. We were able to try our hand at peg loom weaving, spinning raw wool using drop spinners and then weaving it on a home-made loom together with commercially spun wool, knitting teddy bears and other exciting items and creating collages using wool and fabric.

As the photographs show, everyone was engaged with their activity, some of which required intense concentration and others that allowed for conversation and sharing. 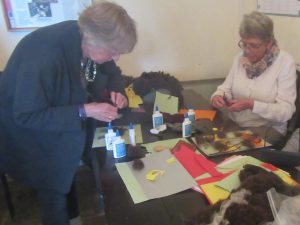 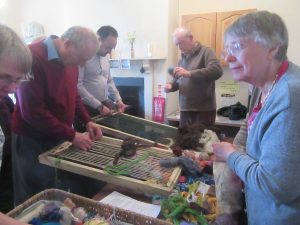 It was a delight to have three Young Friends with us from Hereford Meeting. We were pleased that the more reticent and less craft-orientated Ffriends were happy to have a go too. 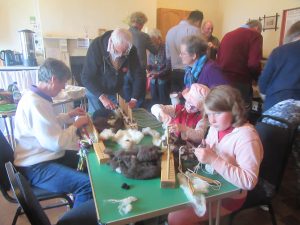 Once again Ffriends in Southern Marches showed how much fun can be had at an Area Meeting.

The weather was kind on June 13, and 19 people gathered to ‘abstract the landscape’ under the  friendly guidance of the artists Lois Hopwood and Bronte Woodruff. 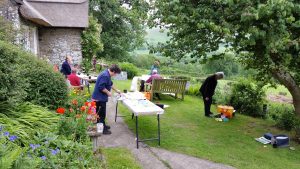 We scattered over the grounds to make sketches, and were challenged to simplify these into lines and shapes.

We discovered the excitement of painting large washes of colour and then used our coloured sheets to create collages inspired by our drawings. There was much to enjoy – the inspirational nature of our surroundings, the fun of working with others, and our experiments  with ‘Vandyke crystals’ a wood dye made from walnut shells which can be used instead of ink. 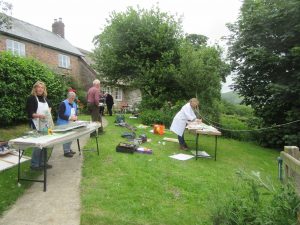 There was much enthusiasm for further Art days of this kind, which we hope to organise in the future. In the meantime all will be welcome at our untutored ‘do it yourself’ Art day, Tuesday September 12th in our celebration week . 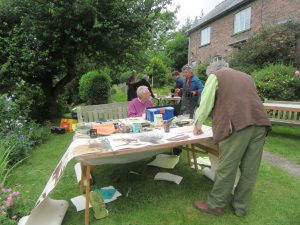 Full details of all events at The Pales can be found on our website – www.thepales.org.uk