From the Pales Steering Group

June – a month to remember.

As June approached, the month ahead was a little daunting, with so many activities due to take place.

June 1 Planned visit to the Pales from attenders of the Hay Festival. Peter Hussey delivered an Interesting talk, his wife Maggie took charge of the catering – thank you –  the  cream tea was enjoyed by the small number of people present and plans were made for  better publicity next year . 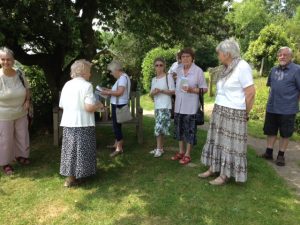 June 9 Jennifer and Claudia’s Wedding. The rain kept away allowing us to enjoy the outdoors. A marvellous spread was provided and enjoyed by all. A lovely occasion.

June 10 Fellowship Day for Southern Marches Area. A talk by Daryl Booth on animal welfare sparked off some interesting and diverse discussion. After a shared lunch, an afternoon of wool-related activities.  I am still knitting my teddy bear!

June 13 Pales Art Day. A very successful event. I came home to  find an industrious group spread all over the grounds, painting, cutting, sticking and drawing  with obvious enthusiasm. 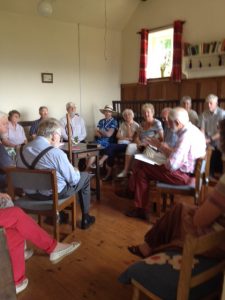 June 20 Peter once again gave a talk, this time to the Men’s Interdenominational Group and their  partners. Teas and coffees were provided, with Maggie’s assistance.

June 24 Llandegley Village Picnic, following a car treasure hunt. Lots of  positive feedback and discussions as to whether further village events could be  held here. 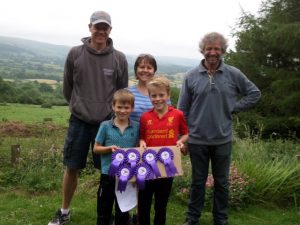 June 29  Peter and Kevin’s  wedding. A high note on which to end the month.  Linda and Mary from Clun  Valley Meeting arrived early: Mary created the beautiful flower arrangements and Linda prepared the tea, with othercontributions from Clun Valley Friends. Approximately 88 people attended, resulting in ‘ standing room only’ for a few. A truly beautiful and moving Meeting for Worship; I particularly appreciated the things said by Peter and Kevin afterwards

I cannot pretend I didn’t experience  a sense of relief that the month had come to an end, but as I look back, what a marvellous month  it was. Thank you to all those who helped to make it so successful. Carole Chapman, Friend in Residence.

And thanks also to Carole who gives everyone such a warm welcome,  ensures that the Schoolroom and Meeting Room are ready for visitors, makes drinks available  – and sorts out lost property after the events. All these events show how well suited the Meeting House, the Schoolroom and the Garden are for events of this kind and that the facilities are able to cope with such numbers. 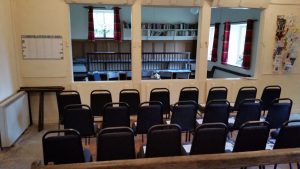 Planning for the refugee day began early in the year. We were keen to share the wonderful site of the Pales, but there was a lot of uncertainty and anxiety.   Were our facilities adequate? From where would the refugees come? How would they get there? If by bus, would child seats be needed? What would they want to eat?  How would we entertain the children?   And what would we do if it rained? Then it turned out that the chosen day – July 15 – clashed with the monthly  meeting of the Pales Peace choir. How would we resolve all these problems?

But through much help, skilfully coordinated by Jeff Beatty, from the Community, Voluntary and Faith sector support for refugees and asylum seekers (Herefordshire), and the  experienced support of the  Hay Brecon and Talgarth Sanctuary for Refugees (for their report of the day see hbtsr.org.uk),  all the difficulties were overcome.   It was agreed to invite the Syrian  families and three young Eritreans who were settled in  Hereford  – a decision which delighted the Hereford Quaker group involved with these refugees, which had been hoping to arrange an occasion for them to get together.

And so, on Saturday morning cars began to arrive at the quarry carpark,  neatly parked to allow plenty of space for the buses  arriving from 10.30.  Together, our 55 visitors from 13 families, the helpers from many Quaker meetings, and the Peace choir totalled around 100 people, but there was plenty of room. Donations had allowed the visitors to choose and buy food to cook, and there  was soon busy activity as fires were kindled and a wide range  of enticing dishes set out, offered to all, while the children played and explored, or were occupied with 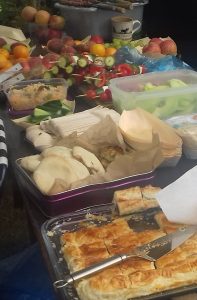 quieter activities in the marquee. It was a day of friendship, laughter, sharing – and song, for in the afternoon the  peace choir (which had spent the morning practising) joined the groups in the camping field. Their songs were in several languages, including the Arabic As-Salaam alaykum  (Peace be with you), which was greatly appreciated, and many joined in. We were lucky to have an Arabic speaker among us, who could translate our visitors’ expressions of thanks. We learned how they especially valued this opportunity to come together and the feeling of community that such an event fostered.  It was a most memorable and moving day for everyone involved.   We are grateful to the very many people who made it possible.

And the weather?  A fine morning for all to enjoy the views; the few drops of rain in the later afternoon failed to dampen the euphoria as our visitors packed up and were given gift bags to take home.  Once again, the versatility of the Pales for events of all kinds was demonstrated.

And finally, a reminder.

In September we are celebrating the tricentenary of the Pales  with  a week of varied activities. Below is a list of events and in the August Newsletter we will tell you more about each event.

All are welcome.  Bring some food if you are coming for the whole day. Drinks will be provided. All the events are free. Donations  will go toward the upkeep of the Pales.

Monday 11th   11-1pm Explore the history of the landscape, a walk led by the local historian Derek  Turner.

2-4pm Discover the  geology of the area, visible in the nearby  quarry, with the geologist  Joe Botting from Llandrindod  Wells Museum

Tuesday   12th   10.30-4.0  Art at the Pales. Be inspired by the amazing views.  Bring drawing and painting materials and  create  your own impressions of the Pales and its setting.

Wednesday 13th  10.30-4   Quaker Testimonies reflected at The Pales A guided look at how the Testimonies are lived through the history, beauty and peace given to us by the Pales,  led by Peter Rivers