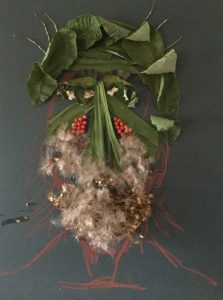 A PDF version of this Newsletter can be downloaded for printing – please click here.
The Pales Newsletter – August 2018

Be careful what you wish for! I ended the intro on the July newsletter saying – ‘now all we need is some rain’. The weather has returned to its normal summer state so the gardens at the Pales are now looking greener, making them a suitable location for a Green Art Day. We have a report on that event and photos of the QVA weekend and the wonders they performed. There is also a reminder about the Pales Annual Lecture on September the 29th. 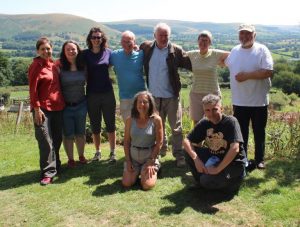 Quaker Voluntary Action enables participation in spirit-led volunteering that makes a practical and social difference. Their projects build community and work for a more just and peaceful world. www.qva.org.uk

QVA held a retreat at the Pales and undertook various task around the grounds. This is an edited report by Alison Smedley, one of the volunteers. The full report can read here – http://qva.org.uk/the-pales-working-retreat-3-6-august-2018/ and more photos of the work done can be seen on the Pales website.

“How then, shall we lay hold of that life and power, and live the life of prayer without ceasing”
(QFP 2.22 Thomas Kelly 1941)

These words were among those which inspired me as I researched the Quaker Voluntary Action theme of prayer ahead of attending a working retreat at The Pales, a remote Quaker meeting house in Mid-Wales. All of life as a prayer; what a simple yet amazing truth to attempt to live by.

The lane to The Pales is tiny and at various points I wondered if I had taken a wrong turn. Then the buildings appeared, unassuming and easily missed. A little further on was the quarry where we could park. Another car pulled up and a couple introduced themselves as Claudia and Marco from Bologna in Italy. We went in together and met Hannah and Laura, facilitators, and Carole, Friend in residence, and tea and cake were generously shared. The first thing which struck me was the overwhelming smell of ‘old’ in the meeting house; it is over three centuries old and the oldest Quaker meeting house in continual use in Wales. Soon Ruth arrived and we quickly became a sociable group. Keith was collected from the railway station at Penybont and we expected two more later.

Five of us camped and we were fortunate to have a dry day to pitch our tents and acclimatise to the grounds. Carole took us on a tour and explained what needed doing. 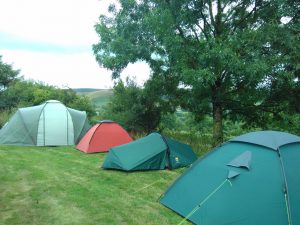 Nothing looked too daunting, though the enthusiasm cooled somewhat when we looked inside the woodshed! Fortunately, the man with the woodshed plan was yet to arrive. Tony, with his van and array of power tools, tackled this job with relish. Malcolm arrived as we were washing up so we were all present for our first epilogue in the meeting room. Here we met with a special silence and an atmosphere which was comforting and welcoming. We entered the room a collection of individuals and left it a community; the retreat had properly begun.

Saturday morning we returned to work, spreading out now over various projects; removing plastic tree guards, clearing the pond and surrounds, hedge trimming and did I mention there was a woodshed?!

Each meal was prepared by two of us and by Saturday lunchtime we had worked up a good appetite and, in the heat, quite a thirst. A more relaxed afternoon of free time and a walking prayer session balanced the day well and our pre-dinner work was quieter and a little gentler. After dinner, epilogue was held on the hillside opposite with the setting sun and a gentle breeze. 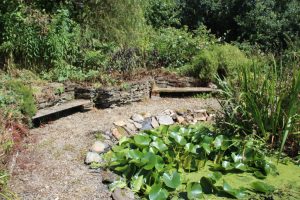 I opted to cook breakfast on Sunday with Tony. A feast of egg, beans, tomatoes and mushrooms which was well-received. We went on to sing and speak and be silent around the newly revealed pond. There was a joyful accompaniment from some resident frogs. Our worship continued at Llandrindod Wells meeting house where we swelled the numbers considerably. This is a simple, modern, purpose-built meeting house set back from the road and shaded, so peaceful and cool.

After a leisurely lunch we gradually resumed work. The pressure had reduced as we had been very productive on Saturday. We began to see smaller jobs which were concealed behind the larger, more urgent tasks; tidying the vegetable garden, trimming the roses around the door oh, and a little more to do in the woodshed… 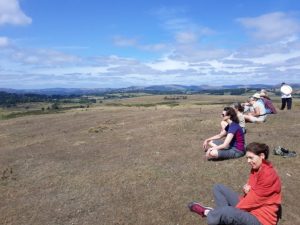 Peter came to tell us of the history of The Pales and of the hopes for the future. All the while firmly rooted in the present.

A very special epilogue among the memories in the burial ground brought this full and fulfilling day to a close.

On Monday I awoke early, a little sad that it was the last day of the retreat, followed by a joy that I could sit in the meeting room alone for a while before breakfast. There wasa little finishing off to be done as well as worship and lunch before departing at 2pm. A very special final worship involved walking in George Fox’s footsteps to Penybont common, where, centuries before, many were convinced and became Friends. Radnorshire became the stronghold of Quakers in Wales. As Quakers, we are mindful of equality, of place and time as well as people. Worship on Penybont common was a very spiritual, gathered experience and a fitting close to our little itinerant community in Mid Wales. We shared laughter, tears, chatter and silence, despair and delight, connection.

The full report can read here – http://qva.org.uk/the-pales-working-retreat-3-6-august-2018/ and more photos of the work done can be seen on the Pales website. 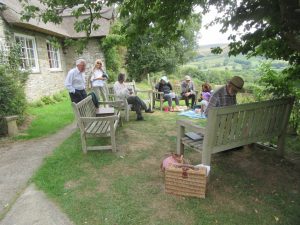 After the weekend work by QVA (see above) the grounds of the Pales were looking at their best, a happy and inspiring place for Green Art enthusiasts. Green Art provides wonderfully varied ways of appreciating the character given to different parts of the grounds by its trees and plants. Around 20 people of all ages and from near and far (two came all the way from Milford Haven) spent a happy and rewarding day.  Some gathered to sit and chat, admiring the magnificent view  while  painting or weaving 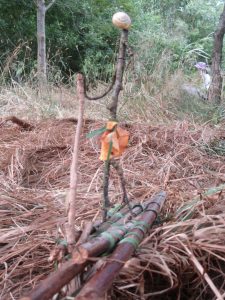 wreaths, others enjoyed solitary exploration of the woodland, or a quiet time by the pond and Peace Pole, while younger participants scampered around the camping site collecting items for their own creations. The simple materials of grass, sticks, leaves , flowers and berries produced most inventive results. A Green Man  appeared in several portraits, and as a whole figure, standing beside a grass castle. A row of logs became a musical instrument. There was a nest beautifully lined with thistledown.Beside the pool were little parcels of stones carefully wrapped in colourful leaves, and an elegant heron made of grass, accompanied by engaging red-eyed snakes made from bamboo stalks and berries. Beneath the trees a stick man shot the rapids over undulating long grasses. And a painting was most ingeniously created from different coloured juices obtained from leaves and plants.

A memorable day of friendship, meditation and creativity, aptly reflecting Quaker principles of simplicity and sustainability.

There are many more photos in a Gallery on the Pales website. 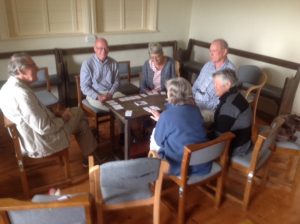 Es & Os held their annual Quiet Day at the Pales on Saturday 11th of August. Thirteen Ffriends attended the whole day event which started with Meeting for Worship and then we all played cards! Julia Richardson had brought along a new Quaker Card 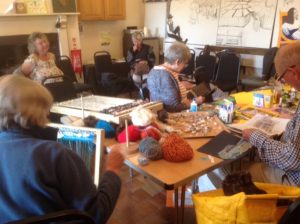 game which encourages Ffriends to consider the nature of Prayer. We all thoroughly enjoyed exploring this topic and all LMs will be able to share the fun as Julia has provided copies of the cards for all Meetings.

A quiet opportunity to spend time together with no ‘busyness’.

There are more photos in a Gallery on the Pales website.

Tickets are available for this event and you can book and pay through the Pales website.

Rather than just talk about prayer Dominic plans to actually give some time to doing it! He will talk about Lectio Divina and then give people a bible passage with which to pray and move them on through the various stages.  He will also do something similar with modern Centring Prayer based on The Cloud of Unknowing, and lead a time of contemplative imagination in the Ignatian tradition. It would certainly be ‘teaching’ rather than a formal academic lecture. After the lecture Dominic has agreed to respond to questions.

Tea and cakes will be provided with an opportunity for informal conversations.

Tickets: £6 in advance (£8 on the door)  through the Pales website, or you can pay at the door.

The Pales pop-up banner was prominently displayed at The Welsh Show in Builth Wells recently. 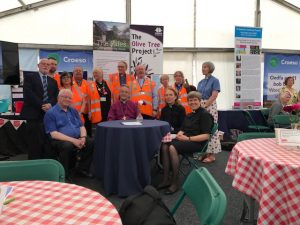 Those in the image are the chaplains at the Welsh Show, and representatives of the Anglican, Methodist and Unitarian communities on the front row.