Written and Edited by Martin Williams 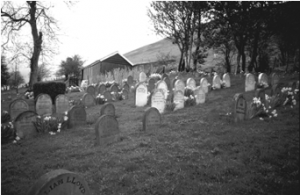 The Burial Ground at the Pales is one of the oldest Quaker graveyards in Wales, and certainly the oldest still in use. The exact date of the first burial is not known, but its use goes back to the early 1670s, yet it has had, at the time of writing, two burials in the 21st century.

George Fox, the founder of Quakerism, first visited Radnorshire in 1657, following earlier visits by Thomas Holmes, and small Quaker communities soon began to spring up, at Llananno, Cregrina, Nantmel and Llanfihangel Helygen, and Llandegley. Early Quakers were very much at odds with the established church and suffered much persecution. The use of church graveyards was not open to them and inevitably, the need for a Quaker burial ground soon became imperative.

In 1673, a “parcel of land” was donated for a period of 999 years to Friends, by David Powell the Elder and David Powell the Younger, of Llandegley and Nantmel. The original deed (see transcript, below) says it is to “remain in use” as a burial ground, so its exact beginning is not known. It is also referred to as a “roundabout”! This is clarified in the second deed, however, which describes it as “fenced in roundabout” – in other words, it was “paled”, or surrounded by wooden posts, hence the name “The Pales”.

A subsequent deed of 1717 bequeathed more land, sufficient for the building of a Meeting House and the establishment of a field area.

The original records of burials are found in a variety of places, such as Local Authority Public Record Offices (Powys, Hereford, and Glamorgan), but the earliest are found, in digest form, at the National Archives at Kew. The earliest burial record so far located is from 1692, that of Roger Hughes, the infant son of Roger and Catherine Hughes, of Llanfihangel Rhydithon.

Early burials were not marked by a headstone, as this was not the practice of early Friends. The oldest headstone at the Pales is dated 1838, and belongs to John Jones, of Little Park. John Jones left a legacy for “the relief of the Poor in Radnorshire”; although now very small, this legacy is still in use today to support Friends of limited means to attend Quaker events.

Visitors to the Pales often remark on the uniformity of the headstones, which is quite unlike the variety found in the graveyards of most denominations. This is quite intentional, and is an aspect of the Quaker Testimony to Simplicity; ostentation in headstones, as in other matters, is to be avoided. Traditionally, a Quaker headstone is of plain design, and contains only the name, the date of death and the age at death. A glance at the Pales headstones will reveal the extent to which deviations from this creep in! One of the most interesting features is the tendency to include the deceased’s farm name, as well as personal name. This surely echoes the Welsh tendency to refer to farming people by their farm name as an adjunct to their forename or surname.

The vast majority of those buried at the Pales are Quakers, but not all. In addition to some non-Quakers buried alongside their Quaker spouses, there are one or two other exceptions, such as the Prince family, who were non-Quaker caretakers of the Pales during the first half of the 20th century. Generally speaking, however, it is a burial ground reserved for Quakers wishing to be buried there (or have their ashes scattered there), from within the regional group, currently called Southern Marches Area Quaker Meeting.

Pales Management Group are occasionally asked for permission to place an object or to plant something in memory of a Ffriend or loved one.

• Request for the planting of trees or shrubs will usually be refused.