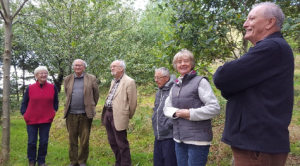 I knew, when I first heard Peter Rivers describing his idea, that I was drawn to attend this day of reflection on the Testimonies.  I was intrigued by the idea of how the testimonies we value and try to live out in our lives could also be expressed symbolically through location.  We began with worship in the Meeting Room that celebrates 300 years of continual use this week.  Then we shared some initial reflections on the Testimonies, focusing on the words of John Punshon Quaker Faith & Practice 20.18 which include:

The testimonies are ways of behaving but are not ethical rules.  A “testimony”… has a purpose, and that is to get other people to change, to turn to God.  Such an enterprise… is in essence prophetic and evangelical.

What is meant by evangelical?  Can truth be absolute? 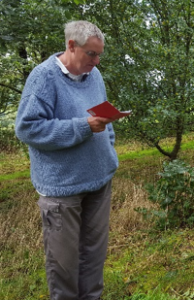 As the sun came out between downpours, we ventured outside to the location of the first Testimony – the Williams Wood.  Peter read to us from Advices & Queries 41 and 42.  “Work to ensure that our increasing power over nature is used responsibly, with reverence for life”.

We heard about the Cadw grant that had enabled trees to be planted in the wood, and saw new growth as a result of some successful pollarding.

We also heard about a remarkable book called “The Hidden Life of Trees” by Peter Wohlleben in which he talks about trees communicating though a network of roots:

The key to it, he says, is the so-called woodwide web – trees message their distress in electrical signals via their roots and across fungi networks (“like our nerve system”) to others nearby when they are under attack. By the same means, they feed stricken trees, nurture some saplings (their “most beloved child”) and restrict others to keep the community strong.

Then we spent about half an hour in silent reflection.  We came back together to share some of our thoughts during which time one friend recalled the words of the Hymn by John Greenleaf Whittier, an American Quaker poet.

Drop thy still dews of quietness,

Till all our striving cease

Take from our souls the strain and stress,

And let our ordered lives confess

The beauty of thy peace 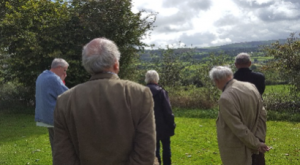 We used the spectacular views from the bottom of the campsite during our reflection on Truth, and QF&P 20.28:

“…take care to keep to truth and plainness, in language, habit, deportment and behaviour; that the simplicity of truth in these things may not wear out nor be lost in our days, nor in our posterity’s;”

Both Truth and landscapes can be seen from different perspectives or “viewpoints”.  The wind reminded one friend of Harold Macmillan’s winds of change speech.  Also that the wind blows where it wills with no bias; and that the answer is blowing in the wind!

Other stories were shared about the Legend of Llandegley Rocks, Padmasambava making an agreement with local spirits in Tibet, and how author Hilary Mantel says we should step into the shoes of our protagonists in order to better understand the truth about them.

As with each part of our reflection throughout the day, we spent around half an hour in silence then returned to the Meeting Room to share together before moving on to the next testimony. 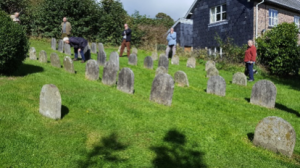 The burial ground is an obvious place to reflect on equality, as the uniformity of the stones illustrates how all are valued as individuals and not with a status (such as husband, wife, son or daughter).    However the burial ground is also simple and peaceful, showing how the testimonies are intertwined.

While of equal worth, it was observed that lives were not of equal length, varying from 3 weeks to 84 years.  The parable of the workers in the vineyard (Matthew chapter 20) has a similar theme.  We heard of a community in Tanzania where people were paid according to their needs.  A&Q 16 and 17 was read.  “…try to sense… what has nourished the lives of others.”  Each life has a story to tell.

Finally we gathered in the peace garden.  Though peaceful on the surface, when you look in detail, everything in the garden is competing for natural resources.  Peace cannot be an external place, but a state of mind within. 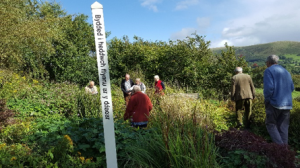 The women at Greenham Common came to pray, and to “witness to that possibility, the possibility that something may be accomplished which in our own strength we cannot do” (QF&P 20.24).  Adam Curle, professor of peace studies, suggests that “relationships between nations, communities, cultures and religions are built on a foundation of millions of small relationships between people”.

Other reflections were shared about Tolstoy’s War and Peace, righteous anger, Ghandi – conserving anger to use when needed, armaments supplied to North Korea (an evil we are all complicit in) and an orchestra playing Shostakovich’s 7th symphony at the siege of Leningrad, a perhaps seemingly pointless action with an enormously powerful outcome.

This was the most difficult of the four Testimonies, and left the weight of a heavy responsibility on us live them out as a “declaration of truth” – to return to John Punshon, QF&P 2018.  This challenge was balanced by the joys of some of the lighter moments of the day, and the enriching opportunities that it offered.  Many thanks to Peter for leading it and developing the idea. 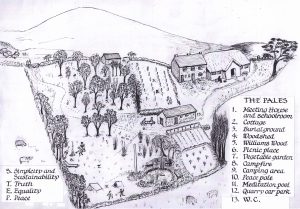 A beautifully illustrated map of the Pales has been produced by the Pales steering group and copies are available for future Friends and visitors to carry out their own reflective journey on the testimonies around the grounds of this special and unique place.