Close to 40 Quakers filled the Pales, as part of the 300th anniversary celebrations, to hear an excellent programme of speakers.  The day was introduced by Bridget Cherry, a member of the Pales Steering group, which is working hard to preserve the Pales and enable it to be appreciated by others in the future.  The shutters were open between the Meeting Room and the School Room in order to accommodate everyone.  The School Room owes its name to the Victorian school established in 1867, but may have originated as a room for  women’s business meetings.  The shutters (renewed in modern times according to the original design) could be opened up  to allow all to take part in Meeting for Worship. As we heard from our first speaker, it was extremely unusual for women to be allowed to participate in public life of any kind at this time.

Christine paints a picture of Quakers in 17th Century Wales whose vision of a prophetic society based on the New Testament – where there would be no difference between slave and free, men and women, old and young – was shocking and outrageous in a hierarchical society.  These “Friends of the Truth” were turning the world upside down. 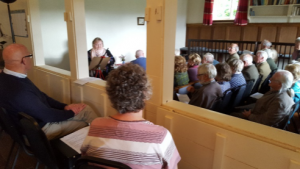 Actively spreading their message led to public disorder and they were frequently physically attacked, as well as fined disproportionally and imprisoned.

The role that women played was distinctive because it was so unexpected.  It was seen as distasteful and improper that they would publish pamphlets, travel around the country and preach – or at least prophesy (there is a scriptural loophole where women can “prophesy” but not preach).  These practices attracted the attention of satirical artists and writers who portrayed Quaker women in a less than favourable light.  Christine led us in detail through a poem“An Eccho” (Anon) full of innuendos, and paintings by Edvard van Heemskirk and Richard Gaywood – both depicting a Quaker women wearing a hat resembling that of a witch.

Such women were seen as a threat both outside, and at times within the Society.  There were fears that these progressive ideas would destabilize family values.  In the face of so much oppression, it is clear that 17th Century Quaker women were truly remarkable.

Gethin took us on an historic geographical tour of Quaker activity across Wales from Wrexham, Colwyn Bay and Bangor, to Dolgellau, Dolobran and Welshpool.  Then on to Leominster and Llandrindod, before arriving at the Pales.

In Gethin’s book “Benign Neglect” the condition of the Pales in 1860 is described as “Perilous”: 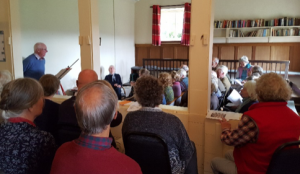 “The meeting can hardly be said to exist.  One infirm, old man… crosses the hills at the hour of worship to sit there alone with God.”

With the appointment of paid Mission Workers by the Home Mission Committee, numbers increased to 60 (recorded in the Tabular return of 1897).  When added to the total members from nearby Llandrindod and Llanyre meetings, members in this area accounted for 38% of Quaker in Wales at this time.

This mission work, also carried out in Cardiff and Swansea, helped the Society in Wales to survive.  However few of the workers spoke Welsh, so only English was heard in Meetings.  London Yearly Meeting failed to publish anything in Welsh.  The Society in Wales was replenished by Friends from other places, and there was scarcely a member whose grandparents were Welsh Quakers.  It was too Middle class and educated for the local working class.  Indeed the Welsh are an emotional people, and the Quietism of Quakers was seen as quite “unsuitable” to Welsh people.

The tour continued on to Brynmawr and the Rhondda where we heard about relief work – inspired by individual Quakers, but which cannot be described as a Quaker initiative.  In some places these efforts were not welcome and attracted criticism, being seen as interference and leading to problems of jealousy, listlessness and over-reliance on others instead of the local population organising themselves.  Finally Milford Haven, Aberystwyth, and Twmbl.  In 1928, through ecumenical connections, it was hoped that a group of excommunicated Presbyterians in Tymbl might become Quakers, until South Wales Monthly Meeting decided that this was not possible because of the expectations of the Yearly Meeting with regard to the way applications for membership should be handled.

Throughout Gethin’s talk it was easy to recognise similarities between some of the challenges faced by Quakers in Wales in the past and those of today.

It was a delight for local Friends to welcome back their much loved previous wardens of the Pales.  Martin and Lynda described how they viewed their season of 22 years, between 1993 and 2015, as “stewardship” in a line of people who all cherished the value and beauty of this place.  They feel privileged to have had the opportunity to have loved and nurtured it and then hand it on to the current warden Carole Chapman. 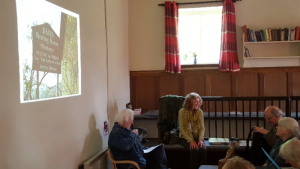 Martin showed us many interesting photos of Meetings in Radnorshire.  Llandrindod, Llanyre and Penybont as well as the Pales had Meeting Houses.  Other peripatetic meetings were held outdoors.   A Radnor Meeting was also established in Pennsylvania where many Quakers emigrated during the 17th Century to escape persecution.  Emigration had a devastating effect on the number of Quakers remaining in Wales.

The establishment of a Day School played a key part in the revitalising of the Pales Meeting.  William Knowles was appointed as the first teacher in 1867 who resigned 7 years later.  He was replaced by an American Quaker Yardley Warner.  Yardley fell in love with Anne, whose story Lynda has researched in her book “A Pales Love Story”, and she brought along 3 artifacts to show us:  an etching of the Pales by Anne; a photograph of a carved wooden Noah’s arch, based on the Pales, and some letters.

Yardley wrote many letters to Anne while she was away in London working as matron of a hospital.  They are all beautiful:

“All this natural and spiritual fullness here fires my soul and fills me with enthusiastic fervency.”

I am sure that anyone visiting the Pales today can relate to this experience.

Geraint Hughes was vicar of Llandegley, a village close to the Pales, from 1968 to 1976.  He became interested in local history and with the help of Martin Williams, published the Diary of Thomas Watkins. 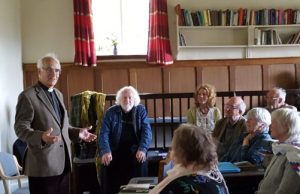 Thomas Watkins was faithful to both the Pales and the Baptist chapel next to his house in Dolau.  He was a farmer and Geraint felt he had much in common as they have both looked after sheep during their life.

Each day his diary is kept in two parts:  firstly a record of farming activities, such as selling a cow, or turnips turning brown; and secondly a prayer.  Both his tenderness for animals, and love of the area are clear, as are his Christian faith and also a sense of humour:

“Lord, doubtless this rain is necessary…”

There is no doubt that spending a day learning about the past generated much encouragement that the Pales should go forward into the future.

Please see https://thepales.org.uk/how-you-can-support-us for details of how you can help this to happen.