The Pales never ceases to amaze but to be told that the car park was of ‘International significance’ marked a high point and helps to explain why it is now designated as a Site of Special Scientific Interest. Joe Botting, a local geologist with close associations with the County, had agreed to give a talk on the geology of the surrounding area. The fact that forty one people turned out to hear his talk is a sign of the esteem in which he is held. 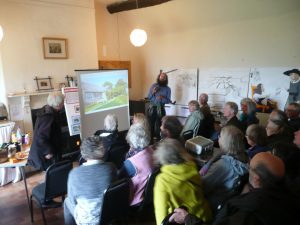 He began his talk by giving us a brief geology lesson, describing the various epochs in geological history and where the Pales fitted in to that scheme – he pointed out that the bedrock where we were was of the Silurian era but that out of the window, across the valley, we could see the Llandegley Rocks that were of the Ordovician era. He explained that the Silurian beds were laid down 420 million years ago and that the Ordovician were 60 million years older. When Joe told us that our current period, the Holocene, covers only 10,000 years, it became apparent how insignificant we were, in Geological terms that is.

Using computer generated graphics he explained tectonicplate movements and showed us where the Pales would have been when the local rocks were laid down, as mud in shallow seas, with sea creatures as the only form of life. It was these creatures that lived and died in these seas that formed the fossils that make the sedimentary rocks, exposed in the quarry where cars are parked for events at the Pales,  so important. Fossils found there are among the most significant in the world and assist in the dating of other rocks and fossils, while others found there are unique to this location.

Joe explained the types of fossils we might find and also described the circumstances in which they had been formed. 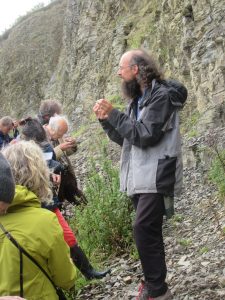 Having fired up our enthusiasm we were then released to go fossil hunting in the quarry and it was not long before we had samples which were proudly presented to Joe for identification. We were soon able to identify Graptolites, bivalves, and sections of the columns of Crinoidea. He asked to retain some for his own collection as they were better examples than those currently held. 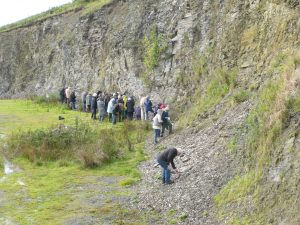 We returned to the Meeting House, clutching our fossils like excited schoolchildren, awed by the beauty and mystery of the world that surrounds us.

The Radnorshire Museum in Llandrindod Wells contains a magnificent collection of locally found fossils together with a history of the surrounding area and is well worth a visit. 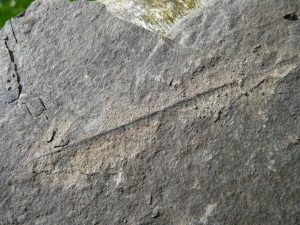