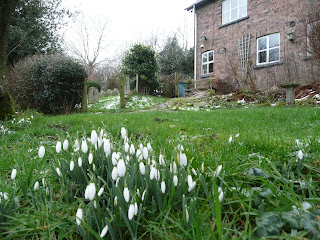 Spring is in the air and snowdrops have bloomed in the Pales garden. There have been several falls of snow but not enough to prevent visitors getting to the site. This month we are talking about signs, snowdrop and starlings, and some updates of 2018 Events. 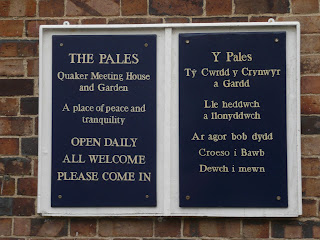 Derek James, a member of the Management Group, has kindly produced a Welsh Language sign to accompany the English sign, displayed outside the Pales.

An evening of English and Welsh poetry and music with Fiona and Gorwel Owen.

Fiona Owen has had five collections of poetry published, the latest being The Green Gate (Cinnamon Press). She teaches creative writing, literature and other arts/humanities subjects for the Open University, and writes and records songs with Gorwel Owen, the latest CD being Releasing Birds.

Gorwel Owen is involved in many music-making activities, including as a performer and recording engineer; he also teaches humanities with the Open University. He writes and records songs with Fiona Owen, most recently their album Releasing Birds.

Tickets for this event will be available in April.

Thurs 9 August     Green Art at the Pales
A day for Ffriends of all ages, exploring the Pales grounds, collecting materials to make sculptures and images.

We are also exploring the possibility of an Annual Lecture, a Sufi day of meditation, a Wildlife day and a quilting day.

We recently publicised an event organised by Lynden Rees-Roberts, a member of the RSPB & Radnor Wildlife Trust.  Lynden has been kind enough to send us a report and some photographs. We understand that Friends travelled up from Ross to witness this spectacular event.

roost in the conifer plantation adjacent to Llandegley Rhos Common. As well as people from the local area, many had travelled some distances, from Rhayader, Presteigne, Shrewbury, Church Stretton, Kington, Clyro and Ross-on-Wye to experience this starling display. Amidst an atmosphere of excitement and anticipation, groups of people of all ages, from families with young children to grandparents with friends and a helping hand, made their way along the public bye-way across the Common and waited patiently for the starlings to arrive. Some twenty or so intrepid bird watchers crossed the River Edw and made their way up onto Blaen Bank for a better bird’s eye view of the roost.And the starlings did not disappoint. They started to arrive at 4.25pm and continued to come in from all quarters north, south, east and west, for another 25 minutes. Depending on where you were standing, as the frequency of the flocks increased, you found yourself turning like a weather cock, to keep up, as thousands of birds streamed and swirled in across the common and over the pine trees creating beautiful, mesmerising murmurations in the winter sky. By five o clock we had lost the light, although a few late arrivals were still flying in, but it was time for us to leave and seek our own roosts for the night, happy that we had shared one of nature’s winter wonders and probably experienced the largest gathering of starlings in Mid-Wales.

Our architects, Simmonds Mills, have now submitted revised plans as a Pre-Planning Application to Powys Planning Department. We are awaiting their response and will report back in April.

As mentioned above, the snowdrops are blooming in the Pales garden, pushing their heads through the light snowfall. Carole has observed a squirrel that appears to have taken an interest in the thatch, so she is keep a keen eye on it! No photo yet, but she is trying. 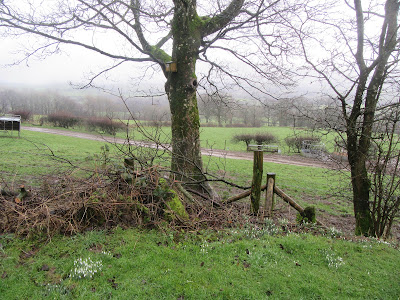 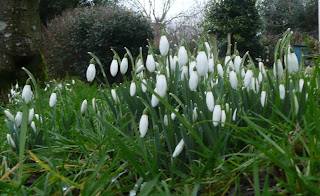 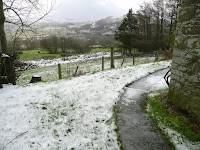